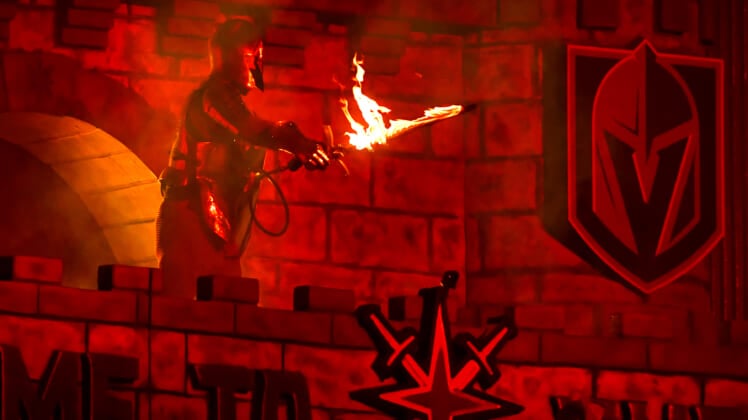 Eichel, the No. 2 pick of the 2015 NHL Draft, was obtained in a trade from the Buffalo Sabres on Nov. 4 for a package that included Alex Tuch and Peyton Krebs. He had 139 goals and 216 assists in 375 games with the Sabres and is viewed as the kind of impact player that could help Golden Knights owner Bill Foley reach his goal of winning a Stanley Cup in the team’s first five years.

However, it will be Eichel’s first game since March 7, 2021. He became the first NHL player to undergo disc replacement surgery in his neck on Nov. 12 and didn’t return to practice until Jan. 11. He was cleared for full contact on Feb. 7 and has been practicing on the first line with wingers Max Pacioretty and Evgenii Dadonov.

Vegas coach Peter DeBoer was asked what he thought should be fair expectations for Eichel in his debut.

“Fair expectations is that he gets out there and takes a regular shift and gets through it healthy and starts to build some confidence,” DeBoer said. “I think anything beyond that … I mean this guy has been out for (11) months and is jumping into midseason.

“He’s a special player. I have no doubt he’s going to return to a really high level but how long that takes, I don’t know. He’s been through a groundbreaking surgery for hockey and missed a lot of time. I think we all have to take a deep breath and let him get through the first game and start to work toward the player he’s going to be for us.”

“I understand it’s been 11 months, I didn’t have any preseason games and having to jump in there against the best team in the league right now,” Eichel said. “But at the end of the day it’s hockey. I’ve been doing it since I was a kid. So I’ll just try to find my game, get as comfortable as I can as quickly as possible, and I think I’ll be all right.”

To make room for Eichel and his $10 million-per-year salary, the salary-cap strapped Golden Knights put captain Mark Stone on long-term injured reserve with a back injury. Goaltender Robin Lehner also will miss the game with an upper-body injury.

It will be the first game in a week for Vegas, which fell out of first place and one point behind Calgary in the Pacific Division during that time. The Golden Knights were blanked by the host Flames, 6-0, in their last contest, a contest that still leaves a bitter taste in DeBoer’s mouth.

When asked if the addition of Eichel should get his team’s adrenaline going, DeBoer replied: “I would think our adrenaline should be high because we got our (rear) kicked in Calgary last game 6-0. I think that’s where it should start.”

Big battle against the Avalanche on tap

The Golden Knights also have uncharacteristically struggled at home this season, compiling a pedestrian 14-10-2 mark while losing five of seven January home contests.

Colorado will be playing the second half of a back-to-back that began with a 4-1 loss to Dallas on Tuesday night, the Avalanche’s first regulation home loss since Oct. 26, when the Avalanche fell to the Golden Knights, 3-1. It’s the first game of a four-game road trip for the Avalanche that also includes stops in Buffalo, Boston and Detroit.

Landeskog was asked about playing in a game that will have the national spotlight shining on it with Eichel’s return.

“He’s a great player,” Landeskog said. “That’s a big move for them. I think it’s exciting for the game that he’s back and healthy. … Listen, we’re going in there to play the Vegas Golden Knights. We’re not going there to play Jack Eichel. We know he’s a superstar in this league. I think most of our team knows what he’s about as a player and how skilled he is.”