The Toronto Maple Leafs acquired Jared McCann from the Pittsburgh Penguins on Saturday in exchange for fellow forward Filip Hallander and a seventh-round pick in the 2023 NHL Draft.

The trade came shortly before the NHL froze rosters ahead of Wednesday’s expansion draft for the Seattle Kraken.

McCann was selected by the Canucks with the 24th overall pick of the 2014 NHL Draft.

Hallander, 21, collected 24 points (13 goals, 11 assists) in 51 games last season with Lulea HF of the Swedish Hockey League. He was selected by Pittsburgh in the second round of the 2018 NHL Draft before being traded to Toronto on Aug. 25, 2020 as part of the seventh-piece deal that included Kasperi Kapanen.

“We are excited to add Filip back to the organization. He is a well-rounded player with good size who plays the game the right way,” Penguins general manager Ron Hextall said. “We are grateful to Jared for his contributions to the team and wish him the best.”

In an apparent salary cap move, the New York Islanders sent veteran forward Andrew Ladd to Arizona, along with a 2021 second-round draft choice, a 2022 conditional second-rounder, and a 2023 conditional third-round selection for no return from the Coyotes.

The Coyotes take on a $5.5 million cap hit over the next two seasons, freeing up cap space for the Islanders. Ladd has two seasons left on a seven-year, $38.5 million deal he signed prior to the 2016-17 season.

Prior to that, Ladd was a regular 20-goal scorer, besting that mark six out of seven seasons from 2010-17.

Opinions are split on Ladd making a comeback, but the Islanders cleared more cap space all the same. This move came on the heels of them trading defenseman Nick Leddy away earlier in the week. The Vancouver Canucks acquired forward Jason Dickinson from the Dallas Stars on Saturday for a third-round pick in the 2021 NHL Draft.

The trade came shortly before the NHL froze rosters ahead of Wednesday’s expansion draft for the Seattle Kraken.

Dickinson, 26, can become a restricted free agent on July 28.

He recorded 15 points (seven goals, eight assists) in 51 games this past season.

Dickinson has collected 63 points (25 goals, 38 assists) in 221 career games since being selected by the Stars with the 29th overall pick of the 2013 NHL Draft.

The San Jose Sharks acquired Adin Hill and a 2022 seventh-round pick from the Arizona Coyotes on Saturday in exchange for fellow goaltender Josef Korenar and a 2022 second-round selection, multiple media outlets reported.

Korenar, 23, meets the minimum exposure requirements for the upcoming NHL Expansion Draft. He was 3-5-0 with a 3.17 GAA and .899 save percentage in 10 games (seven starts) last season. 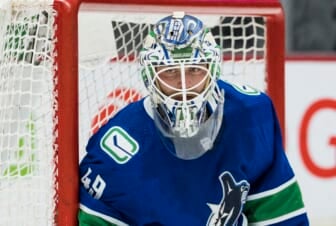