Tom Wilson takes another shot at Rangers: “It shouldn’t be a guy like Panarin jumping on my back” Tom Wilson has weighed in on the New York Rangers influx of toughness that included nemesis Ryan Reaves.

“There’s something with that team that probably had nothing to do with me, and it might have been the perfect storm. It all came to a tee at the right moment, and it was probably boiling over to begin with,” Wilson said per Sammi Silber of WHN. “And people like to jump on the part of whatever people are saying.”

Of course, the Caps forward is referencing the melee that occurred at Madison Square Garden HE started by sucker-punching Pavel Buchnevich.

Wilson says Panarin shouldn’t have been in that situation

Artemi Panarin jumped into action by grabbing Wilson from behind. The 6-4,220 lbs beast was seeing red at the time and rag-dolled the Rangers’ 5-11′, 170 lbs skilled forward to the ice.

“It shouldn’t be a guy like Panarin jumping on my back,” Wilson explained. “That whole situation — I won’t speak to it too much — but he shouldn’t feel like he ever should have to do that. So there are things in the game of hockey where teammates stand up for each other and stuff.”

After the incident, it was revealed that Wilson and Alex Ovechkin called Panarin to see if he was doing okay. “I think [Panarin] is a player that’s great for the game,” he said after the incident. “He’s a great personality. He’s a heck of a player, and I like battling against him. I just wanted to send him a text and check in.”

Jeff Gorton was shocked to lose his job over the incident

“You can’t tell me JD who loves toughness didn’t know we weren’t tough,” Gorton revealed. “All the meetings we had with David Quinn talking about getting tougher over time, we also needed some of these young guys who were playing for us to have to deal with adversity – see how they did with it too.”

“Obviously it didn’t go well, and Wilson should’ve been suspended,” he said. “I didn’t think that night was going to be what it turned into – that people were going to lose their jobs.” 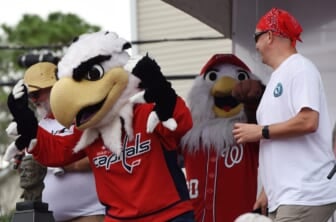 Rangers said they won’t be concerned with payback on Wilson

The Rangers brought in a lot more size and toughness to the roster this offseason. Barclay Goodrow, Sammy Blais, Jarred Tinordi, and Patrik Nemeth will all bring those elements. However, it is Reaves that once called himself “the solution to your Tom Wilson problem” that has everyone focused on what payback is coming for the Capitals forward.

“It’s not going to overtake the team,” Gerard Gallant wanted to make clear. “We’ll address that before the first game of the year, I’m sure, but the bottom line is that when we brought these players in over the summer we wanted to make our team tougher to play against. You knew whoever was going to be with the Rangers this year was going to change the complexion of the team a little bit, there was no doubt.”

Ultimately, Wilson sees the Rangers as a playoff caliber team and feels the moves make the Rangers better to compete in the Metropolitan Division.

“Maybe it does a little bit have to do with the toughness of the division, but I wouldn’t credit that to me,” Wilson said. “I think those new guys in there are trying to make that team better, they’re trying to contend to make the playoffs.”

The Rangers and Capitals open up the season against each other in Washington. If I were a betting man, Wilson and Reaves are dropping the gloves.

Also Read:
NHL Rumors: Teams interested in Jack Eichel trade but with conditions; and Johnny Gaudreau will not discuss contract this season