The NHL Rumors buzz turns to three teams out of the playoffs and focusing on offseason plans.

In Seattle, the Kraken will be looking to the free agent market for more scoring help. Meanwhile, the NY Islanders will be making some changes, which should include a better winger for Mathew Barzal.

And in Vancouver, what’s next for the Canucks and popular head coach Bruce Boudreau?

The Seattle Kraken completed their first NHL season with a 27-49-6 record for 60 points and a last place finish in the Pacific.

One area that Seattle must improve on is in the goal scoring department. They finished 29th in the league with just 216 Goals For. The Kraken averaged 2.63 goals per game, which was significantly lower than the NHL average of 3.14.

“We had chances, we just couldn’t do it. Goal-scorers are not easy to find, but if we can add something in the free-agency market,” GM Ron Francis said via the Seattle Times. “Guys that can come in and play in our top six, top nine, that’s certainly something we’ll look for.”

Attracting free agents is not going to be easy, especially for any older veteran prioritizing winning a Cup over more money. However, there are several interesting options that may be a perfect fit.

Pending UFA Max Domi, who is currently with the Carolina Hurricanes, is a great option. He’s only 27 years-old and is probably looking for a top six opportunity. Also from the Canes is 28 year-old Vincent Trocheck, who hits the UFA market on July 13.

Seattle also had some interest in trading for New York Rangers pending UFA center Ryan Strome. If the two sides can’t find common ground, expect the Kraken to pursue. Same for other Rangers’ UFAs in Andrew Copp and Frank Vatrano.

Mathew Barzal, 24, had a difficult season but that could be said about the entire New York Islanders organization. In 73 games, he posted a solid 59 points which was on par with his .81 points per game average the season prior.

He has one more season on his deal worth $7M AAV, but it would behoove GM Lou Lamoriello to get his top offensive star a better winger.

It might take some salary-cap gymnastics, but the Islanders should absolutely pursue a high-end free agent if one becomes available — such as Filip Forsberg, Johnny Gaudreau or Claude Giroux.

The names mentioned by Kurz are highly unlikely to be available. It’s possible Giroux will be, but there’s some talk of him wanting to end his career back home with the Ottawa Senators.

Considering cap concerns, it would be more likely that the Islanders will try and address scoring via a trade.

When the Vancouver Canucks opted to fire head coach Travis Green early in the season, they did so with their record at a lowly 8-15-2. The Canucks brought in 67 year-old veteran Bruce Boudreau and the team took to him immediately by making a push for a playoff spot up until the last week of the season.

However, according to Thomas Drance of The Athletic, the Canucks are not entertaining the idea of offering Boudreau an extension.

Both Boudreau and the Canucks have an option for this season. It appears that they both have mutual interest to stay together for one more year.

At the time of his hire, it was announced he agreed to a two-year deal ($2 million this season, $2.5 million next season) but it’s actually a one-year deal with an option for next season. While no one will confirm this, I think it’s the kind of option where if the Canucks don’t pick it up, he gets paid some cash out of it to walk if he’s not kept on. Either way, it requires Jim Rutherford and Patrik Allvin to make a decision — which I suspect they’ve already made, but are waiting until after the season to announce. 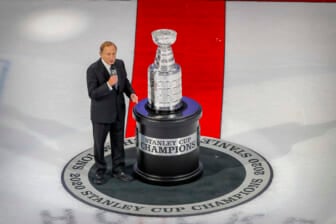 Also Read:
Can we stop the nonsense about expanding the NHL Playoffs?