We’ve already had some trade activity over the last few days. The Montreal Canadiens shipped Tyler Toffoli to the Calgary Flames for a nice package of futures earlier last week. That was followed by a deal between the Toronto Maple Leafs and Arizona Coyotes.

By trading Nick Ritchie and his $2.5M cap hit for one more season to the Yotes for pending UFAs Ryan Dzingel and Ilya Lyubushkin, Toronto shaved a few bucks off their cap.

The NHL Trade Deadline is steadily approaching with the last day to make trades coming March 21. A flurry of activity is expected leading up to that date with the next domino to fall being Ben Chiarot in Montreal.

Chiarot, 30, recently landed on IR with a lower-body issue. He has 9 points in 44 games and could play top four minutes on the left side for a playoff team. Even when he is eligible to come off IR, I doubt the Habs will risk another potential injury this close to trading him.

“You name a playoff contender; I believe they’ve phoned. The likes of Florida, Boston, the New York Rangers, St. Louis, among others. The Flames could circle back on Chiarot at some point,” Pierre LeBrun said last week on Insider Trading.

The rumored asking price for Chiarot starts with a first round pick and another prospect.

Will the Islanders be sellers at the deadline

The New York Islanders have a 7.6% chance of making the playoffs per MoneyPuck, which puts GM Lou Lamoriello in a shocking position come the NHL Trade Deadline. For a team many pegged as a Stanley Cup contender prior to the season, having to sell off assets wasn’t something in the cards.

Kevin Kurz, who covers the team for The Athletic looked into that possibility and cited that the most likely candidates to be moved are:

One interesting note is that the Islanders could use this lost season to try and make a big deal for Coyotes’ Jakob Chychrun. They were rumored to be heavily interested in acquiring the star defenseman this past offseason.

The New York Rangers will be active at the trade deadline. Just exactly who they will land is the big question. While they are rumored to be heavily after J.T. Miller, the cost to acquire him is high and would also spell the end of Ryan Strome in a blue jersey.

Speaking of Strome, he and the Rangers continue to talk extension. Latest reports indicate the two sides are far off when it comes to term and money.

Additionally, Chris Drury has been getting calls on goalie Alexandar Georgiev. Both the Oilers and Golden Knights reportedly called on his availability. At this time, nothing offered has moved the needle for Drury with the highest offer believed to be a third round pick.

For what it’s worth, Georgiev has more value as Shesterkin’s back up for this season. If Drury can’t get higher than a third rounder, he can move the RFA’s rights at the draft for that kind of return.

“I checked with a couple NHL front offices over the past few days who feel that when they talk to Vancouver lately, it feels like J.T. Miller has been reeled back in by the Canucks,” Pierre LeBrun stated on Insider Trading. “Now, we’re a month away from the trade deadline, so perhaps a bit of cat and mouse, but I think the message is clear from the Vancouver Canucks to other teams, they don’t feel they have to trade J.T. Miller. He’s got a year-and-a-half left on his deal and this notion that J.T. Miller’s worth is higher now than it would be this summer, the Canucks’ front office does not believe that.”

The 28 year-old has one year remaining on his deal that comes at a great cap hit of $5.25M. He’s recorded 51 points in 49 games this season.

“They feel they can get as much for him in the summer as they can now and by the way, maybe they’ll just sign him this summer, so all options are on the table,” LeBrun continued. “Translation is this, if you’re the New York Rangers, or any other team, you have got to step up in a meaningful way to get the Canucks’ attention on J.T. Miller, or else they’re happy to keep him.”

The Capitals are making their playoff push and are said to be in the market for a goalie and a forward.

One such player is Devils’ forward Pavel Zacha, who is garnering interest by several teams as we approach the trade deadline. New Jersey is overstocked at the center position and the young pivot is being made available.

As for goalies, the team was rumored to be in on Blackhawks Marc-Andre Fleury is he becomes available. 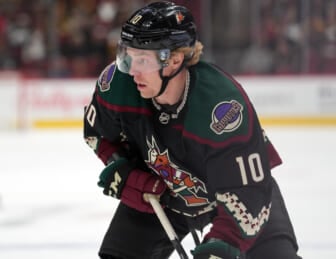