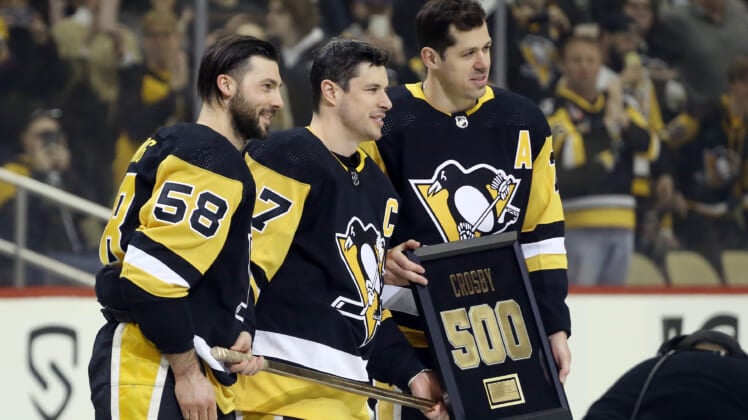 The Pittsburgh Penguins may have witnessed the end of an era when the Rangers came back from a 3-1 deficit to eliminate them in these Stanley Cup playoffs.

With both Evgeni Malkin and Kris Letang up for unrestricted free agency they could be elsewhere next season. This became even more likely after a report surfaced that Pittsburgh offered Malkin and Letang the 3 year-deal worth $5M AAV each.

Way back in January, the Pittsburgh Penguins had initial contract talks with Malkin and Letang. While GM Ron Hextall hinted he would love to bring them back, he cautioned that both players may want to pursue other options.

Malkin noted at that time he wasn’t thinking about his next contract and Letang hasn’t said much about it himself. Sidney Crosby wants to keep the band together, but it sounds like they are about to split.

Letang, 34, is in the final season of a contract that comes with an AAV of $7.25 million. This year, he’s registered 68 points in 78 games. There’s no doubt there will be a market for Letang, but with a fairly stagnant salary cap that list will grow short if he wants big bucks and anything over 3 years. There are rumors of him signing with the Montreal Canadiens in the offseason.

Malkin, 35, finished the year with 42 points in 41 games. He’s wrapping a deal worth $9.5M AAV against the cap. Where he lands is anybody’s guess.

Bergeron, 36, is coming off an 8 year-deal with a cap hit of $6.75 million. He’s still highly competitive and productive with 65 points in 73 games.

Everyone was expecting him to sign a contract extension with the Bruins before becoming an unrestricted free agent on July 13 but that made now be in doubt.

“I’m going to need time to think about a lot of things and come up with the best decision for myself and my family,” he said on breakup day.

There was some speculation that Bergeron would consider playing for the Montreal Canadiens to end his career. He is a Quebec native after all.

“No,” Bergeron ended speculation. “I’ve been here my whole career and it’s a special place for me.”