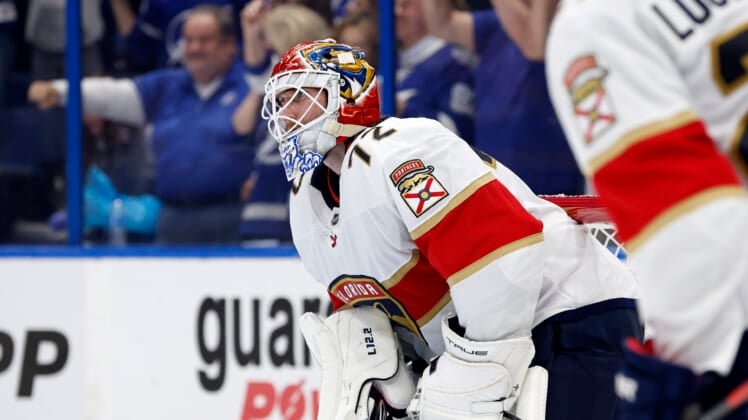 Today’s NHL Rumors focuses on the Florida Panthers and what will they do next after being swept by the Tampa Bay Lightning in the second round.

The Panthers finished as the Presidents’ Trophy winner with the most points during the regular season (58-18-6, 122 points). They were also the top scoring team in the NHL with 340, 25 more than the second ranked Toronto Maple Leafs, yet only mustered 3 goals in their series with the Lightning.

So with Aleksander Barkov and Carter Verhaeghe’s extensions kicking in next season, Florida has just under $4 million in cap space to get better. It has sparked rumors that the Panthers will be looking hard to gain more room this summer.

Bobrovsky is entering the fourth season of his seven-year, $70 million contract. That’s a mind-boggling $10M AAV for a goalie.

According to Elliotte Friedman on his latest 32 Thoughts Podcast, he mentioned that the Florida Panthers, in desperate need for cap space looked into trading Bobrovsky.

“I suspect that they tried hard to trade him this year, or at least lay the groundwork to do it,” Friedman said. “I don’t know if it’s possible but I’ve heard they really worked on it. They really tried to see if it was possible. And that might just be a function of the salary cap.”

The question is simple: How much of his cap hit are the Florida Panthers willing to eat? It will probably take 50% for anyone to be interested, but unlikely that the Panthers will pay a goalie $5M per season not to play for them.

Have we finally seen the end of the line for Jumbo Joe Thornton?

“My wife was kind of asking me last night,” Thornton said. “And really, I have no plans. It’s kind of exciting that way. I came here to win a championship, and we fell short of that. But I think the Florida Panthers are going to be good for a long time. It’s exciting around here now.”

This was Thornton’s 24th season and no one would blame the 42 year-old if he hung up his skates.

“I’ve been privileged to play this game for a long time,” Thornton said. “I don’t take anything for granted.”