As Nazem Kadri continues his excellent season in the playoffs, the NHL Rumors Mill buzzes more and more about where he could land this summer.

Kadri, 31, was a former 1st round pick (7th overall) of the Toronto Maple Leafs, who traded him to the Colorado Avalanche in 2019. The Leafs received Tyson Barrie, Alex Kerfoot, and a 6th round pick in exchange for Kadri, Calle Rosen, and a 3rd round selection.

Needless to say, the Avs won the deal.

Of course, with Nathan MacKinnon eligible for an extension this summer, it will be difficult to keep Kadri.

According to CapFriendly, the Avs have 13 players under contract with $26M in space to fill out a roster.

Obviously there is no way the Avs will retain all their free agents but you have to think both RFA’s Lehkonen and Aube-Kubel are on the must keep list.

So could Kadri stay? In his own words, he does love Colorado as he wrote in a Players’ Tribune piece.

I know I spoke about how difficult leaving Toronto was, but it had nothing to do with Colorado. That was between me and the Leafs. Denver has been great for me and my family, and we couldn’t be happier to raise Naylah here. It’s such a beautiful city and the people have made us feel right at home.

However, Kadri re-signing is slim once you factor MacKinnon’s eventual extension kicking in for the 2023-24 season. That’s why it looks very likely that he’ll be on the market come July 13.

Whomever signs him will need to be prepared to give him the term he’s seeking, which will be 6 or 7 years. When it comes to the AAV, it’s possible Kadri lands around the $8M AAV range.

So who will be in the market for a number one center come July?

The Philadelphia Flyers after losing Claude Giroux seem like a logical candidate. Another team I could see interested are the New York Islanders, who will have to do something about their lack of scoring.

The Boston Bruins could be aggressive if Patrice Bergeron opts to retire, but they have to make cap space for such a signing. One team I could see give Kadri max money and term are the Seattle Kraken, who are expected to be very aggressive in free agency.

Two teams I see with an outside shot are the Ottawa Senators and New Jersey Devils. These are organizations that are ready to move to the next phases of their plans to be more competitive.

Kadri will do just that for any team luck enough to get him. 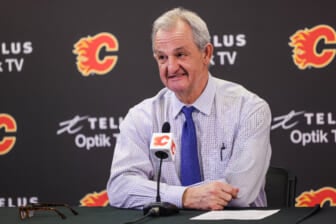