Today’s NHL Rumors takes a look at the rebuilding Chicago Blackhawks and their captain Jonathan Toews.

While a lot of focus has been on Patrick Kane, Toews has played really well this season with 10 points in 14 games and looking like his old self. Both players are expected to me moved at the NHL Trade Deadline on March 3 to expedite the rebuild of the Hawks.

Toews, 34, isn’t a fan of rebuilding and will likely be looking to waive his no-move clause come the next trade deadline. The Hawks will have to eat half of his contract in order to entice a team to take the pending UFA despite his improved play.

Blackhawks GM Kyle Davidson spoke with Mark Lazerus of The Athletic (subscription required) on a myriad of topics and had this to say about Toews.

“We’ve always had a vision for Jonathan of being part of the culture-building and being that leader that has been through it all, seen it all, and can help us usher in that next era,” Davidson said. “So I don’t think it changes anything there. Maybe from other teams, it changes their plans on whether they’re going to call or not… He has a lot of value for us. How that manifests itself moving forward with other teams checking in, we’ll see. But we’re not there yet.”

Kane and Toews are entering the final season of their respective eight-year contracts signed in 2014. The three-time Stanley Cup champion players have identical $10.5 million cap hits for the Blackhawks, who finished in seventh place in the Central Division last season and have qualified for the playoffs just once since 2017.

Toews’ name has been attached to the Colorado Avalanche and Edmonton Oilers as possible landing spots.

The Vancouver Canucks continue to struggle with a record of 4-9-3 and have lost their last 3 games. Head coach Bruce Boudreau is on the hot seat and the first coaching change of the season seems imminent.

ESPN’s Kevin Weekes provided an update on the situation today.

“[Boudreau] is an outstanding coach…but there’ve been some comments from Jim Rutherford that a coaching change could be on the horizon,” Weekes said. “Everyone is looking at Barry Trotz but I’m also looking at Rick Tocchet as a name to watch. He has a relationship with Rutherford from their days in Pittsburgh– they’ve won cups, so I’m keeping my eye on Tocchet.”

Currently, Tocchet is an analyst for the NHL on TNT but is widely considered an up and coming coach who knows how to relate to his players. He could be a good fit for a young Canucks club. 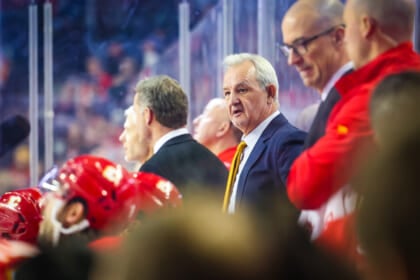