The Flames are struggling this season as they finally got their first win in 8 tries by beating the Winnipeg Jets 3-2 on Saturday.

One of Calgary’s biggest issues has been goal scoring as they rank 23rd in the NHL starting play today. Jonathan Huberdeau, who recorded 115 points last season with the Florida Panthers has toiled the most with just 6 points in 11 games to start the 2022-23 campaign.

“I heard this week the Flames are looking around for a scoring forward,” Elliotte Friedman said on Sportsnet. “I’ve been told that’s going on since August. I do think if there’s a team to keep an eye on right now it would be St. Louis.”

The Flames have no cap space so any trade will need for salary to go the other way.

Speaking of the Blues, two prominent forwards are heading to unrestricted free agency in July and could be made available.

Vladimir Tarasenko and Ryan O’Reilly have already begun popping up in the trade rumor mill with the likely ask being picks and prospects.

Tarasenko, 30, is in the last year of a deal with an AAV of $7.5 million. This season, he’s posted 10 points in 13 games for St. Louis and hasn’t rescinded a trade request that dates back to the summer of 2021.

O’ Reilly, 31, has struggled immensely this season with just 4 points in 13 games. He’s also in the final year of a deal with AAV of $7.5 million.

Pierre LeBrun of The Athletic, recently speculated that O’Reilly may be a perfect fit for the Colorado Avalanche at the trade deadline. Meanwhile, Tarasenko has been linked to teams like the Flames and New York Islanders since last season.

There’s no secret that the Ottawa Senators want to bolster their future on defense.

For the longest time they’ve been attached to Arizona’s Jakob Chychrun and may very well still land him once he’s fully recovered from his wrist injury. However, the potential loss of Thomas Chabot, who injured in the third period against the Flyers on Saturday may expedite the trade situation.

“A couple of teams have said [GM Pierre Dorian] has been looking under every rock to find a defender,” Friedman revealed on HNIC. “He doesn’t want to do anything insane and doesn’t want to make a desperate trade that looks bad for years to come.”

It’s been reported that Dorian balked at the Yotes high asking price of two first-round picks and a high-end prospect for Chychrun. That should give everyone an indication of how cautious the Senators are being.

No contract talks yet for Bo Horvat

One more note from Sportsnet’s 32 Thoughts segment on Saturday is that contract talks between the Vancouver Canucks and captain Bo Horvat are apparently non-existent.

“Jim Rutherford is with the team in Toronto and [Horvat’s] agent Pat Morris is based there, I wondered if they would meet,” Friedman said. “I’m told the answer is ‘no’, and there’s no meetings scheduled.”

Horvat, 27, has been one of the bright spots in a dim Vancouver season with 17 points in 15 games. He’s entering the final year of his contract with an AAV of $5.5 million.

“Our priority is to keep Bo (Horvat),” Canucks president Jim Rutherford said last week. “We recognize what he can do for us. I hope we can sign him but if he keeps playing like this we’re going to get a better return for him.”

If not contract extension is hammered out by the NHL Trade Deadline on March 3, Horvat will be among the top top rentals on the market. 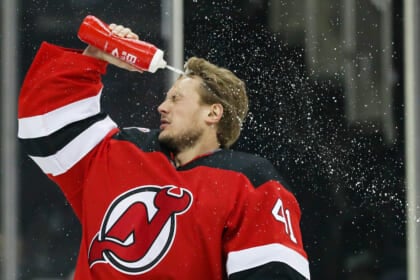