The weather is slowly changing as September starts to usher in the fall and NHL Rumors begin to pick up steam. In today’s edition, we start in sunny San Jose and then head north of the border to Montreal and Vancouver.

Sharks all-star defenseman Erik Karlsson has been vocal in the past about not wanting to be part of a rebuild. “Obviously, I did not sign here to go through a rebuild or go through what I did for 10 years in Ottawa,” Karlsson said via NHL.com last year.

Karlsson, 32, scored 35 points in 50 games last season, showing he can still produce. His campaign was cut short due to surgery on his forearm.

Since the trade deadline, there’s been talk about the Sharks possibly moving the offensive defenseman but that’s problematic because of his contract. Seriously, even if he waives his full no-move clause, what team will take on five more years with an $11.5 million AAV?

When Karlsson was recently asked if he’d requested a trade, his response indicated he hadn’t.

“No, I committed here a long time ago,” the defenseman told The Athletic in comments published Wednesday. “It didn’t work out the way we wanted it to early on. There’s a lot of things that probably played into that. I’m not going to get into details about that, but I am excited for the future here now. I hope we can move in the direction to be successful again. Is that going to be this year? I mean, who knows? But I do think something good can come out of here.”

It looks like Karlsson will be a fixture on the Sharks blue line for the next several years.

According to Kevin Weekes, the Montreal Canadiens and Jake Allen are working on a multi-year contract extension.

This news is coming off the heels of the Habs signing young goalie Cayden Primeau to a 3-year deal and a possible retirement message from Carey Price.

In an Instagram message with a photo of Price hanging his hat up he wrote:

“I just want to thank everyone who has been supportive over the past few weeks, months, and years. It has been a very emotional time for myself. Merci. GO HABS GO.”

GM Kent Hughes said this summer he does not expect Price to play this season. The team subsequently placed him on LTIR.

Now that J.T. Miller signed a massive extension to stay in Vancouver, there’s been some speculation that Bo Horvat could be on the trade block.

The 27 tear-old will become a UFA in July of 2023, which fuels speculation. The captain of the Canucks scored a career high 31 goals last season and finished with 52 points in 70 games.

However, one analyst doesn’t see that as the case. Sportsnet’s Iain MacIntyre dove into the situation and believes that the Canucks can make it work.

“Well, I don’t think Bo Horvat is going to be much of a challenge because he is a core player on this team and he will get signed to a long-term deal,” he believes. “I think probably this idea that now that you have Miller done you can’t do Horvat, I think that is a little bit false. The reality of the situation is that J.T. Miller is going to go from $5.25 million to $8 million. Bo Horvat’s making $5.5 million and let’s say he goes to $7 million. So in total you have to find another $4 million or so dollars next year. It’s roughly the amount they’ll have coming off their cap in dead money. So they can afford both these guys.”

While that is a logical argument, the looming extension for Elias Pettersson in 2024 has to be considered in any deal they give Horvat. 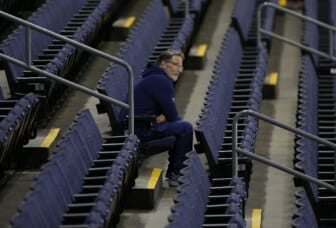