NHL Rumors: A new coach for the Blackhawks; GM candidates; and trade possibilities

The Chicago Blackhawks are a franchise in disarray both on and off the ice. As fallout continues from the findings in the sexual assault investigation, Chicago is in search of a new GM to replace Stan Bowman.

Additionally, the rumblings of Jeremy Colliton being out as Chicago’s head coach are only growing as the team blew a lead and lost to the Maple Leafs last night. The Hawks remain winless on the season at 0-5-2.

Colliton is in his 4th season as head coach in Chicago with a record of 86-88-26. The question now becomes, how long before he’s replaced?

If the Blackhawks do let Colliton go, Rick Tocchet seems like a prime candidate to take over as the new bench boss. The former NHL power forward took the reins as Arizona’s head coach back in 2017. He amassed a 125-131-34 record with the Coyotes during his tenure.

“I have great respect and admiration for all the players I coached in Arizona, along with my coaching staff, the medical staff, the equipment managers, the PR staff and the team services staff,” Tocchet said in a parting statement. “They are the best in the NHL, and I appreciate all their help and hard work. I also want to thank the fans of the Valley for all their support. I have loved living, playing, and coaching in Arizona and this place will always be special to me.”

In six seasons as an NHL coach with the Lightning and Yotes he’s 178-200-60. This summer he interviewed for the vacant positions in New York, Seattle, and Buffalo. He’s highly respected for being able to get a lot accomplished in difficult circumstances, and that’s where the Blackhawks are on the ice.

The Hawks will likely want to hire a GM before making a coaching change.

Many names are being bandied about as the next Blackhawks GM. Veteran executive Jeremy Rutherford is still highly regarded and could get the nod. Some suggested that former Blackhawk Eddie Olcyck be given a chance at guiding the franchise back to respectability. Others feel Kevin Weekes has been long overlooked for such a position as well.

However, considering where the Blackhawks are on the ice, one name stands out. Jeff Gorton, guided the New York Rangers from an aging team through a rebuild. He restocked a barren prospect pipeline into one of the best in the NHL in just a few years (lottery picks aside).

Gorton would be the perfect GM replacement because he has actual recent rebuild experience to revamp the Hawks. 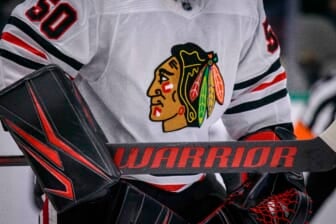 Certain veterans like Patrick Kane and Jonathan Toews may not want to hear this, but whichever GM gets the job, trading older players is the route they need to go.

It will most likely start with Marc-Andre Fleury at 50% cap retention. Then decisions will be made on players like Dylan Strome, who at 24 is young enough to fit the rebuild model. On defense, 30 year-old Calvin De Haan seems like a prime candidate to be moved for picks and prospects.

Then you get to the two big names mentioned at the top. Will they waive? How much will the Hawks need to retain to maximize return? One thing seems certain, the Blackhawks have a long way to go both on and off the ice to become respectable again.