Saturday night is hockey night in Canada, and also across the NHL landscape. With 14 games and 28 teams in action, it was an exciting evening filled with thrills dashed with some special moments.

Connor McDavid notched a hat trick, and Jesse Puljujarvi collected a goal and two assists to lead the host Edmonton Oilers to a 5-2 victory over the Calgary Flames on Saturday.

Derek Ryan also scored in the win and goaltender Mike Smith made 45 saves for the Oilers, who have started the season with a pair of victories. Leon Draisaitl collected three assists.

Andrew Mangiapane and Elias Lindholm replied for the Flames, while goalie Jacob Markstrom stopped 28 shots in Calgary’s first game of the campaign. The Flames have lost 12 consecutive season-opening games.

McDavid, Draisaitl and Puljujarvi added to their notable career numbers against the Flames in their first Battle of Alberta showdown of the season, but it was Ryan who opened the scoring. Despite the Flames holding the early momentum, Ryan batted a rebound out of midair at the 13:08 mark.

Drew O’Connor and Brock McGinn each had a goal and an assist as Pittsburgh built a four-goal lead in the first period and won its home opener over Chicago.

Patrick Kane had a goal and an assist, and Kirby Dach also scored for Chicago. The Blackhawks’ Marc-Andre Fleury, formerly a Penguins franchise goalie, gave up four goals on 10 shots before being pulled for Kevin Lankinen, who made 15 saves.

“I just give our guys credit,” Sullivan said on his milestone. “They’re playing hard. I think they’re playing, collectively, as a group. They’re trusting one another out there. The players, they’re playing the game hard. They’re executing.”

Cody Eakin scored in regulation before Tage Thompson and Arttu Ruotsalainen scored in the shootout to lift host Buffalo over Arizona.

Thompson and Nick Schmaltz of Arizona made their shootout attempts in the first round, and Ruotsalainen buried his attempt to start the second before Tokarski stopped Phil Kessel’s try with his pads. Dustin Tokarski made 20 saves for Buffalo, which has won its first two games after finishing with the fewest points in the NHL last season.

Andrew Ladd scored, and Karel Vejmelka made 32 saves for Arizona.

Steven Stamkos rocketed home the game-winning goal with 15 seconds left in overtime to lift Tampa Bay to a victory over host Washington.

Already with an assist, Stamkos grabbed possession of a puck in the defensive end late in the extra session, raced in one-on-one against defenseman John Carlson and fired in his third tally for the Lightning’s second consecutive win. Mikhail Sergachev scored his first goal this season, and Erik Cernak recorded an assist.

High-scoring right winger Nikita Kucherov skated gingerly to the bench in the middle of the third period and did not play the rest of the game. Head coach Jon Cooper had no update on his status after the game.

Lightning goalie Andrei Vasilevskiy allowed one goal on 33 shots to go to 2-1-0.

Alex Ovechkin scored the 733rd goal of his career, and Trevor van Riemsdyk posted an assist for Washington, which has split its two games (1-0-1). Also Read:
Alex Ovechkin off to a great start in Gretzky Goal Chase

Andrei Svechnikov scored with six minutes remaining in the third period to break a tie and help Carolina to a victory over host Nashville.

Ryan Johansen and Filip Forsberg scored for the Predators, who have started the season with consecutive home losses.

Brad Marchand added a penalty-shot goal and an empty-netter for Boston, which began its first season since 2006 without longtime goalie Tuukka Rask on the roster. Swayman became the first rookie goaltender to start a season opener for the Bruins since Blaine Lacher in 1995.

“When you don’t have many shots, it’s just something that you have to work on mentally,” Swayman said via NHL.com. “I think playing in between the whistles — just whistle to whistle — helps me a lot.”

Luke Glendening scored his first goal of the season for Dallas, which was coming off a 3-2 season-opening overtime win at the New York Rangers on Thursday. Braden Holtby stopped 37 shots for Dallas and fell to 18-5-0 lifetime against the Bruins.

Alexis Lafreniere scored the tiebreaking goal with 10:10 remaining in front of his family and friends as New York beat host Montreal.

Lafreniere, the No. 1 overall pick in 2020, played in his native Montreal for the first time and snapped a 1-1 tie in impressive fashion. Lafreniere, who turned 20 on Monday, grew up in the Montreal suburb of Saint-Eustache and scored his 13th career goal.

“Pretty good moment to score in Montreal,” a grinning Lafrenière said. “It was really special. The building was electric tonight. I got a couple of stitches from it, but it was worth it.”

Alexander Kerfoot had a goal and an assist, and Toronto defeated visiting Ottawa.

Wayne Simmonds and Michael Bunting also scored for the Maple Leafs, who won for the second time in three games to open the season. Jack Campbell made 20 saves for Toronto.

Josh Norris scored for the Senators, who defeated the Maple Leafs in their season opener on Thursday. Anton Forsberg stopped 26 shots for Ottawa.

“It was an amazing feeling,” Bennett said. “I’ve had a lot of fun here in Florida, and every game I have more fun. We’ve got a great team. It was a great game.”

Anthony Duclair and Aleksander Barkov also scored for the Panthers, and winger Jonathan Huberdeau had an assist and became the first player in franchise history to reach 500 points.

Oliver Wahlstrom scored New York’s goal. Ilya Sorokin made 24 saves for the Islanders, who have lost both of their games so far this season in their season-opening 13-game road trip.

Filip Zadina scored the go-ahead goal in the second period, Thomas Greiss made 40 saves, and host Detroit earned the victory.

Robby Fabbri and Sam Gagner also scored for the Red Wings. Conor Garland scored the lone goal for the Canucks, while Jaroslav Halak was credited with 18 saves.

Vancouver, which was dealt its first regulation loss, had a 41-21 advantage on shots on goal. The Canucks were 0-for-3 on the power play. 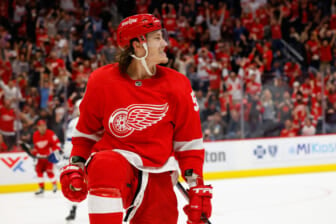 Laine took a pass from Zach Werenski and beat Seattle goaltender Philipp Grubauer with a wrist shot from the right faceoff circle. Eric Robinson also scored for Columbus and Elvis Merzlikins made 19 saves.

Brandon Tanev scored the lone Seattle goal and Grubauer stopped 23 of 25 shots. It was the third goal in the past two games for Tanev, who tallied twice Thursday in a 4-3 victory at Nashville, the first win in franchise history for the Kraken.

Cam Talbot started for the second straight night and made 29 saves to help Minnesota knock off host Los Angeles. Talbot made 28 saves in a season-opening win at Anaheim the night before.

Frederick Gaudreau, Victor Rask and Ryan Hartman scored for the Wild, who rallied from a 1-0 second-period deficit for the second straight night.

Anze Kopitar had a goal and an assist to give him seven points (four goals, three assists) in the Kings’ first two games. Viktor Arvidsson also scored, and Jonathan Quick made 27 saves for the Kings.

Ryan O’Reilly and Brayden Schenn also scored, Jordan Kyrou had two assists and Jordan Binnington made 29 saves for the Blues, who were playing their season opener.

J.T. Compher had a goal and an assist, Andre Burakovsky and Tyson Jost also scored, and Darcy Kuemper stopped 23 shots for Colorado. Nazem Kadri had two assists for the Avalanche.

Knotted at 2 to start the final frame, Hertl — who also had an assist — netted a power-play goal and Balcers scored at even strength 1:37 later to build a 4-2 lead at 5:02.

Jansen Harkins cut it to 4-3 at 13:28, but Winnipeg could not get the equalizer and lost in San Jose for the first time in five outings.

“We got slow in the middle of the game,” Jets coach Paul Maurice said. “[In the beginning] I felt like we moved the puck easily.”