Excitement galore on Saturday night across the NHL landscape with 13 games on the docket.

The Carolina Hurricanes held off a late Dallas Stars rally to win it in overtime. Meanwhile, the Edmonton Oilers were stunned by the Anaheim Ducks goalie Lukas Dostal despite firing 49 shots at him.

The Metro Division race tightened up further as the New Jersey Devils lost again as the New York Rangers, and Washington Capitals continue to win.

Let’s dive in and recap all the action.

Martin Necas scored at 2:19 of overtime to give Carolina a victory against Dallas in Raleigh, N.C.

“We came straight down the ice 2-on-1 with a little back pressure, so there was not much time for making a play,” Necas said via NHL.com. “He made a great play back to me. It kind of bounced over [Dallas defenseman Miro] Heiskanen’s stick and went in.”

Alex Ovechkin did not score a goal for Washington and remained at 800 goals, one behind Gordie Howe for second on the all-time list.

Trevor van Riemsdyk and Garnet Hathaway also scored for the Capitals, who have won six of their past seven games. Sonny Milano added three assists and Evgeny Kuznetsov had two assists. Charlie Lindgren made 34 saves.

Auston Matthews had a goal and an assist for the Maple Leafs, who have lost two straight. William Nylander also scored.

Gustav Forsling and Carter Verhaeghe also scored for Florida and Sergei Bobrovsky made 30 saves in the victory.

John Marino scored for New Jersey and Akira Schmid stopped 25 of 28 shots for the Devils, who have now lost a season-worst five straight.

David Krejci put Boston ahead in the second period and the Bruins added two goals in the third period in a victory over visiting Columbus.

Krejci, Taylor Hall and David Pastrnak each logged a goal and an assist for Boston, which is 3-0-1 in its last four games and 16-0-2 at home this season. Pastrnak reached the 20-goal mark for the seventh consecutive season and Jeremy Swayman made 31 saves for his first win since Nov. 29.

Patrik Laine had a goal and an assist, Boone Jenner also scored and Johnny Gaudreau assisted on both power-play tallies for the Blue Jackets.

Artemi Panarin, Barclay Goodrow and K’Andre Miller each had one goal and one assist to lift New York past host Philadelphia.

Miller’s goal was worthy of goal of the year consideration as he jumped out of the penalty box, made a defensively play, and scored despite being tripped to his knees on the play.

Jimmy Vesey, Jacob Trouba and Ryan Lindgren also scored one goal apiece for the Rangers, who won their sixth in a row. James van Riemsdyk, Scott Laughton and Morgan Frost scored one goal each for the Flyers.

Philadelphia played without Kevin Hayes, who was benched by head coach John Tortorella for personal reasons. Flyers goaltender Carter Hart stopped 29 shots. The Flyers received a power play at 16:40 when Vincent Trocheck slashed Frost. Hart was pulled for an extra skater midway through, but Trouba scored on the empty net from nearly the length of the ice at 17:52.

Drake Batherson scored two goals and Alex DeBrincat had three assists to lead Ottawa to a road win over Detroit.

Ottawa scored three power-play goals and two short-handed goals, one of which was an empty-netter. The Senators scored the game-winning goal with 11:46 left in the game on a power play. Claude Giroux fired a wrist shot from the right faceoff circle into the net to give Ottawa a 4-3 lead.

Joe Veleno, Adam Erne and Filip Hronek scored for the Red Wings, but Ottawa always had an answer before pulling away in the third period. 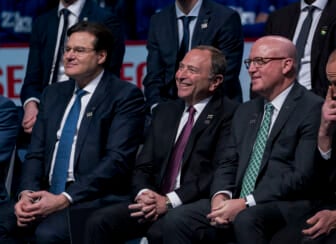 Also Read:
NHL contemplates 84 game schedule but should they?

Defenseman John Klingberg’s third goal in two games broke a tie 6:08 into the third period, and Lukas Dostal made 22 of his career-high 46 saves in the final frame, as visiting Anaheim beat Edmonton.

Tied 3-3 with just under 14 minutes to play, Klingberg picked the puck up on the far board and threw it on net by late-reacting Edmonton netminder Stuart Skinner (13 saves). Klingberg scored twice during Thursday’s 5-2 win at Montreal for the Ducks, who were outshot 49-17, but managed back-to-back wins for just the second time this season.

Dostal, in his sixth NHL start, was stellar when needed. He stepped up late, when Anaheim was outshot 23-2 in the third. He made back-to-back key saves on Edmonton’s late power play against the Ducks, who got a goal and an assist from Ryan Strome and goals from Cam Fowler and Sam Carrick.

“It’s such a cool moment, getting a ‘W’ in this building, playing against [Connor] McDavid, [Leon] Draisaitl and those guys,” Dostal said. “I’m just so happy for the boys that we were able to get a ‘W’.”

Nikita Kucherov had a goal and an assist, Nicholas Paul scored and Anthony Cirelli hit the back of the net on the power play for Tampa Bay. Steven Stamkos dished out a pair of assists, giving the captain a nine-game point streak against the Habs and points in 14 of his past 15 contests against them.

In stopping 22 shots and notching his 10th straight win over Montreal, goaltender Andrei Vasilevskiy improved his all-time record to 13-1-2 against the Canadian club.

Jeff Skinner had two goals and an assist in his return to the lineup to help Buffalo to a win against Arizona in Tempe, Ariz.

It was Skinner’s first game back after serving a three-game suspension. Tage Thompson had a goal and two assists for his third straight multi-point game, Alex Tuch had three assists and Rasmus Dahlin had two assists for the Sabres, who have won three straight and are 8-3-2 in their past 13 games. Craig Anderson made 29 saves.

Shayne Gostisbehere and Barrett Hayton scored, and Connor Ingram made 38 saves for the Coyotes, who lost for only the second time in their past five games. Thompson put Buffalo ahead 3-2 on the power play at 10:07 of the third period before Tyson Jost and Kyle Okposo added goals to seal the victory.

It was Colorado’s sixth straight win over the Predators, dating back to the first-round playoff series between the teams last season. Matt Duchene scored his 10th career goal against his former team, and Juuse Saros turned away 27 shots for Nashville. The Predators are 0-4-2 in their last six games.

Saros came off for an extra skater with 1:30 left in the third, but Makar scored an empty-net goal with 32 seconds left, his seventh of the season, to seal the victory.

Simon Holmstrom scored what proved to be the game-winner in the second period with his first career NHL goal and Semyon Varlamov made 35 saves as New York snapped a three-game losing streak with a victory over Vegas in Las Vegas.

Brock Nelson and Zach Parise each had a goal and an assist and Anders Lee and Hudson Fasching also scored goals for New York, which improved to 5-3-1 all-time against Vegas. Jean-Gabriel Pageau added a pair of assists.

Pheonix Copley made 23 saves and allowed just one goal in a shootout to help Los Angeles to a win against visiting San Jose.

Phillip Danault and Jaret Anderson-Dolan scored for the Kings, who were playing their first game in Los Angeles following a six-game road trip. Kevin Fiala and Trevor Moore scored in the shootout, and Copley added an assist on Danault’s goal.

Timo Meier had a goal and an assist, Kevin Labanc also scored and James Reimer made 39 saves for the Sharks, who were trying to win three in a row to match their season high.

Kyle Connor and Sam Gagner both collected one goal and one assist to lead injury-ravaged Winnipeg to a road victory over Vancouver.

Kyle Capobianco, Neal Pionk and Axel Jonsson-Fjallby also scored for the Jets, who received a 22-save performance from goaltender Connor Hellebuyck. Pierre-Luc Dubois collected three assists in Winnipeg’s sixth victory in eight outings, and fifth consecutive on the road.

Hellebuyck’s bid for a shutout was spoiled with just over five minutes remaining when Bo Horvat deflected a point shot for a power-play goal, his 22nd tally of the season. Canucks goalie Spencer Martin stopped 22 shots.