May 17, 2022; Sunrise, Florida, USA; Tampa Bay Lightning right wing Nikita Kucherov (86) celebrates with teammates after scoring during the third period against the Florida Panthers in game one of the second round of the 2022 Stanley Cup Playoffs at FLA Live Arena. Mandatory Credit: Sam Navarro-USA TODAY Sports

The NHL Playoffs Round 2 are in full swing with two riveting games in the books.

The Tampa Bay Lightning were down early in their second round series to the Florida Panthers but used a very dangerous power play to score three times. Florida is going to need to stay out of the box if they hope to win the series. They put Tampa on the man advantage six times.

Meanwhile, the St. Louis Blues proved they are going to give the Colorado Avalanche more trouble than their last opponent, the Nashville Predators. It took overtime to decide the winner in Game1 and it was trade deadline acquisition Josh Manson that got it done.

Tonight, the other two series will begin with the Carolina Hurricanes hosting the New York Rangers and the Edmonton Oilers visiting the Calgary Flames in the Battle of Alberta.

Pierre-Edouard Bellemare scored the go-ahead goal with 16:25 left to play as the Tampa Bay Lightning rallied to defeat the host Florida Panthers 4-1 on Tuesday night in the opener of their Eastern Conference semifinal playoff series in Sunrise, Fla.

“It’s fun to be able to help the team offensively at times,” Bellemare said. “Our line, last series we had to kind of manage when we were on the ice, and tonight it was more about trying to build momentum for the team when we’re out there.”

Tampa Bay’s power play went 3-for-6, while the Panthers — who led the NHL in goals scored this season — went 0-for-3 on their power play. They are now 0-for-21 on the power play in the playoffs.

Corey Perry and Nikita Kucherov each had one goal and one assist for Tampa Bay, and Andrei Vasilevskiy made 32 saves. Ross Colton had the final goal.

The Panthers got 32 saves Sergei Bobrovsky and a goal from Anthony Duclair off a sizzling assist from Jonathan Huberdeau.

Game 2 of the best-of-seven series is set for Thursday night, also in Sunrise. The Lightning are the two-time reigning Stanley Cup champions, while Florida had the best record in the league in the regular season.

Josh Manson scored at 8:02 of overtime, and the Colorado Avalanche beat the St. Louis Blues 3-2 in Game 1 of their Western Conference semifinal series in Denver on Tuesday night.

“In my dreams, [I scored] like a one-hander or something,” Manson said, laughing. “It’s not about how I feel, it’s about how the whole team feels. Seeing everybody come at me was the best part.”

Manson also had an assist, Valeri Nichushkin and Samuel Girard had goals, Gabriel Landeskog had two assists and Darcy Kuemper stopped 23 shots for the Avalanche, who have won their first five games of this postseason.

“‘Mans’ had a nice pump fake up top first that he doesn’t get a whole lot of credit for, but that was really nice, and kind of got their forward to bite,” Landeskog said. “He was able to get a shooting lane, and at that point I’m just trying to stand in front and kind of move out last-second.”

Colorado outshot the Blues 13-0 in the extra period and broke through when Manson, a deadline acquisition from Anaheim, scored his first goal of the postseason. 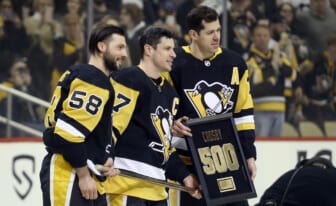