The NHL is taking threats made to Nazem Kadri very seriously. Per multiple reports, the league has asked the St. Louis police to ramp up security at the Avalanche’s team hotel. In addition, security will be heightened for tonight’s game at the Blues’ arena.

“We take threats made to any of our Players or other Club personnel seriously,” Deputy Commissioner Bill Daly said as per Darren Dreger. “We are in touch with St. Louis Police Department and they are employing enhanced security procedures both at the arena and in the hotel”.

This is all stemming from an incident in Game 3, where Kadri collided into Blues goalie Jordan Binnington causing a lower-body injury that took him out for the rest of this series.

Kadri, 31, has a history of supplemental discipline which includes a vicious head shot to Blues defenseman Justin Faulk in last season’s playoffs. He was suspended eight games for that hit and the Avalanche swept that first round series.

To his credit, Kadri has made a conscious effort to clean up his game and stay on the ice.

On Saturday, Kadri and Blues defenseman Calle Rosen went hard for a loose puck which led to a huge crease collision that injured Binnington.

No penalty was assessed but calls for another Kadri suspension started immediately.

Kadri voiced his defense after the game and the NHL Department of Player Safety obviously agreed with him.

“I just see a loose puck,” he said. “I was kind of just sitting behind him and just tried to poke it with my stick. And I think their defenseman (Rosen) kind of collided with me and pushed me into him. So, you know, had that not been the case, I don’t think I would have hit him at all. It’s a loose puck. I’m just trying to bang it in.”

Akim Aliu, a former NHL player who chairs the Hockey Diversity Alliance, said Kadri has been on the receiving end of “racist” remarks since Saturday night.

“Naz has been subject to so many racist attacks and threats since last night that police had to be brought in,” Aliu wrote on Twitter on Sunday. “Racist attacks like this have no place in hockey and should be investigated and reported on.”

Kadri is also a founding member of the HDA.

The Colorado Avalanche will seek to go up 3-1 in their series over the St. Louis Blues tonight. Kadri has 6 points in 7 playoff games to date. For the season, he collected 87 points in 71 contests. 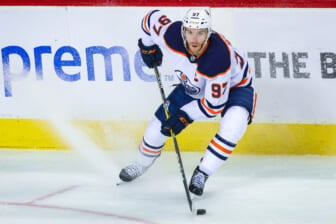