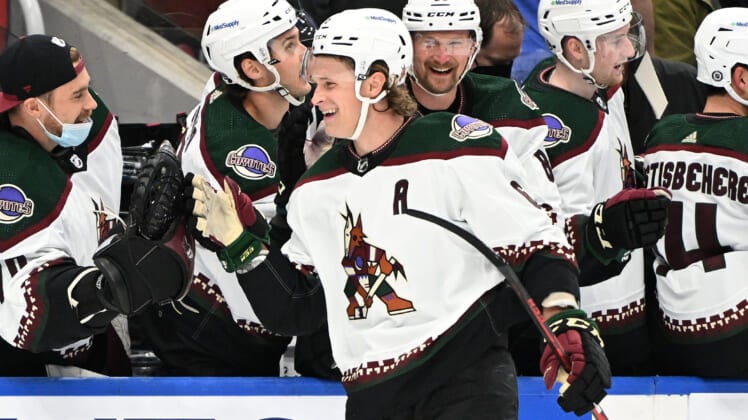 Jakob Chychrun remains the most rumored name out there regarding a trade. This dates back to last season when he was expected to be on his way out the door. However, an injury near the NHL Trade Deadline put an end to any possible deal.

Now the Arizona Coyotes star defenseman is healthy and we’ve turned the page to a new season with his desire to be moved public.

Over the summer, the Ottawa Senators were believed close to a deal but balked at the Coyotes high asking price. That should’ve put an end to speculation but on Saturday night those flames were only stoked by one of the league’s top insiders.

“I’ve got Chychrun and the Senators high on my radar,” said TSN’s Darren Dreger.

“There have been ongoing discussion between the Ottawa Senators and Arizona Coyotes about Jake Chychrun,” Dreger added. “That rumor isn’t going away anytime soon. It’s no secret that Ottawa needs to add to their defense. I look at Ottawa as a legit landing spot for Chychrun. [GM] Bill Armstrong and the Coyotes see Chychrun’s value on the ice and with his contract. If there was a sensible deal, it would’ve been done by now.”

While the Senators remain the most likely destination, there are others teams in the mix. It will be the first one willing to give up the assets the Yotes want that will land him.

At the end of the day, it sure seems this will be Chychrun’s last season in the desert.

“I don’t want these years to keep going by and be 10, 12 years in and not had a real good chance at not only the playoffs, but winning the Stanley Cup,” Chychrun said entering training camp. “That’s really my mentality and where I’m at and I think the team understands that, to get moved to a situation with a chance to win and a team that’s fighting for the Stanley Cup.”