May 20, 2021; Tampa, Floida, USA; Florida Panthers forward Sam Bennett (9) is congratulated after scoring a goal against the Tampa Bay Lightning during the first period in game three of the first round of the 2021 Stanley Cup Playoffs at Amalie Arena. Mandatory Credit: Kim Klement-USA TODAY Sports

Agitating forward Sam Bennett has found himself a home. The Florida Panthers signed the restricted free agent to a four-year contract on Monday.

Financial terms were not disclosed by the team, however multiple media outlets reported the deal is worth $17.6 million. ($4.4M AAV)

“Sam’s impact on our club this past season was seen immediately, injecting physicality, skill and energy into our lineup,” Panthers general manager Bill Zito said. “We are thrilled to have him in our Panthers lineup and look forward to what he can bring to our offense in the upcoming 2021-22 season.”

The move comes two days after the Panthers acquired Sam Reinhart from the Buffalo Sabres. Keeping Bennett in the fold gave Florida three of the top four picks of the 2014 NHL Draft (No. 1 overall pick Aaron Ekblad, No. 3 Reinhart, No. 4 selection Bennett).

Bennett has collected 155 points (73 goals, 82 assists) in 412 career games with the Flames and Panthers. 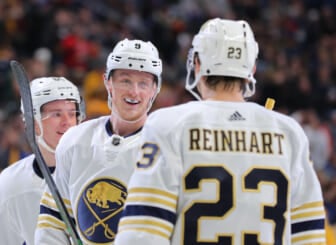