Nazem Kadri is coming off an incredible season where he registered a career high in assists and points. His performance helped elevate the Colorado Avalanche to a Stanley Cup title but he had a bigger play to make this offseason.

Soon after signing a 7-year deal the Calgary Flames with an AAV of $7 million, he announced a $1 million donation to the London Health Sciences Centre establishing the Nazem Kadri Surgical Centre.

“As a kid growing up London, Ont., my community is very important to me and my family. As I got older, I felt the need to contribute back to the community that raised me,” Kadri said in a video statement. “I’m honoured to give back to my community by establishing the Nazem Kadri Surgical Centre. Please join me in transforming surgical care for patients across our community.”

It truly has been an incredible year for the 31 year-old center, who persevered through threats directed at him after a collision with St. Louis Blues goalie Jordan Binnington in the playoffs.

“I just see a loose puck,” he said. “I was kind of just sitting behind him and just tried to poke it with my stick. And I think their defenseman kind of collided with me and pushed me into him. I’m just trying to bang it in.”

Kadri was able to put to power through that incident and scored 15 points in 16 games during the Avs Cup run. He is also credited with being the first muslim player to get his name engraved on the Cup.

“As I sit here and reflect, I’m a London boy, these are the streets I grew up on, this is the mosque I used to come to and everything seems to have come full circle,” Kadri said. “I’m very appreciative, privileged and honored to be the first-ever Muslim to be able to bring the Stanley Cup to the mosque. That’s something I’m always going to respect and always going to remember.”

Kadri posted career-high totals in assists (59) and points (87) to go along with 28 goals in 71 games last season with the Colorado Avalanche. He added 15 points (seven goals, eight assists) in 16 games as part of the Avalanche’s run to a Stanley Cup title.

The Nazem Kadri Foundation was started while Nazem was with the Maple Leafs. You can learn more about the organization here.

Eakin, 31, scored 12 points in 69 games for the Buffalo Sabres last season. He was selected by the Washington Capitals in the third-round of the 2009 draft. For his career, he’s registered 256 points in 701 contests over 11 years. 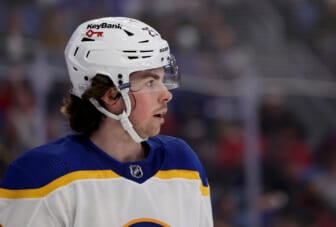