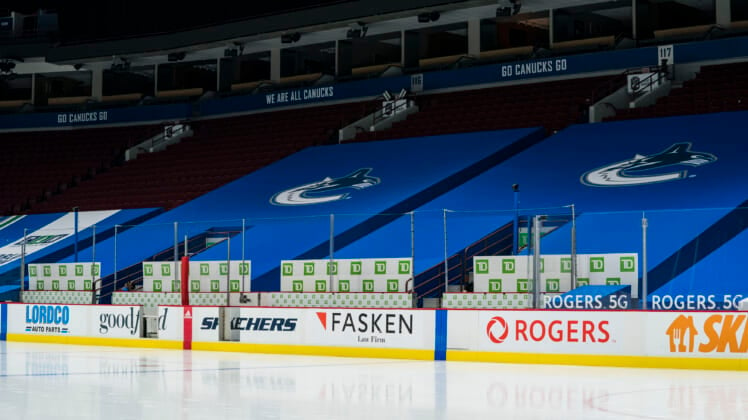 Mar 31, 2021; Vancouver, British Columbia, CAN; A general view of an empty Rogers Arena after the game between the Calgary Flames and Vancouver Canucks scheduled for Wednesday was postponed due to COVID-19. Mandatory Credit: Bob Frid-USA TODAY Sports

The Vancouver Canucks news has even more players being added to the COVID protocol list today. According to Darren Dreger the number of players and coaches that have tested positive for COVID-19 is now over twenty. This is not just impacting the players and staff. Family members are also infected with various symptoms including vomiting and dehydration to go with other COVID related issues like fever.

Vancouver Canucks shutdown due to COVID

There’s genuine concern around the NHL if the Canucks will be able to complete the season as the COVID outbreak worsens. Pierre LeBrun tweeted out information that revealed this is also the Brazilian variant of the virus. This shutdown is similar to the situation in Dallas to start the year that lasted two weeks.

Currently the league wanted to conclude the regular season by May 11 but will likely go past that for the North Division. Yesterday the NHL warned all its teams to not let their guard down. There’s also some whispers that the NHL may consider a bubble again to complete the playoffs.

“It’s not what anybody wants, but what I can tell you is that it’s going to be discussed,” Sportsnet’s Elliotte Friedman reported during Saturday’s Headlines segment on Hockey Night in Canada. “It depends on how the world evolves between now and then. “Again, it’s not what anyone wants and it’s not the preferred option, but depending on where we go here over the next little while, they’re going to have to at least have a plan on the table.”