The Nashville Predators opened the 2022-23 NHL season with a 4-1 win over the San Jose Sharks in Prague.

Forward Kiefer Sherwood, who is on his third team in his fifth NHL season, earned enough trust from Nashville coach John Hynes to be slotted onto the second line in the season opener. He responded by contributing a goal and an assist in the victory.

Sherwood likely will get another shot at playing in the top six when the Predators face the Sharks again on Saturday in the second game of the 2022 NHL Global Series.

“Just try to put my head down and work,” Sherwood said. “Play the game the right way, get in on the forecheck and create possessions for my linemates.”

Just 1:01 into the game on Friday, Sherwood helped win the puck in the corner of the San Jose zone and passed it out to defenseman Ryan McDonagh, who then slid it over to defense partner Mattias Ekholm.

Ekholm’s point shot was saved by San Jose goalie James Reimer, but it rebounded off the skate of Sharks forward Logan Couture. Sherwood poked the loose puck into the net for a 1-0 lead.

“Just a simple play, get it to the point and try to get to the net,” Sherwood said. “Beat my guy off the wall and, luckily, it found its way in.”

The goal that brought out the biggest cheers from the crowd of 16,648 at O2 Arena was the lone goal scored by the Sharks.

Tomas Hertl, who was born in Prague, tied the score 1-1 later in the first period.

“When they were chanting his name, I got goosebumps,” Couture said. “I can only imagine what he felt.”

Hertl said it was an emotional game, starting with the Czech national anthem.

“I was kind of seeing my family there, and it’s a special moment to represent my country in the NHL at home in Prague,” Hertl said. “So, a lot of emotion, and it was just a special moment. I’m so proud I can be even here.”

San Jose coach David Quinn said he didn’t like the way the Sharks played over the final 25 minutes of the season opener.

“They really took it to us,” Quinn said. “I thought we got a little bit demoralized. We’ve got to toughen up a little bit mentally in that department.”

Nashville forward Nino Niederreiter, who scored on Friday in his first game with his new team, said the Predators need to come out fast like they did on Friday.

“They’re a proud team over there,” Niederreiter said of the Sharks. “We’ve got to make sure we finish strong, come out the same way we did (Friday night), even better, and go from there. “

Kevin Lankinen is expected to start in goal for the Predators after Juuse Saros made 30 saves in the win for Nashville on Friday.

Kaapo Kahkonen is expected to start in goal for San Jose after James Reimer made 28 saves on Friday.

Kahkonen is 0-2-1 in three career appearances against the Predators with a 3.39 GAA and an .892 save percentage.

Myers, 32, did not participate in practice on either Thursday or Friday. The 6-foot-8 Myers registered one shot on goal during the Canucks’ 5-4 win over the Edmonton Oilers in a preseason game on Wednesday.

Myers recorded 18 points (one goal, 17 assists) in 82 games with the Canucks last season.

He has totaled 325 points (87 goals, 238 assists) in 840 career games with the Buffalo Sabres, Winnipeg Jets and Canucks. He was selected by the Sabres with the 12th overall pick of the 2008 NHL Draft.

Late on Friday night, Canucks General Manager Patrik Allvin announced the acquisition of defenseman Riley Stillman from the Chicago Blackhawks in exchange for forward Jason Dickinson and a second round pick in the 2024 draft.

Stillman, 24, scored a career-high 12 points in 52 games with the Blackhawks last season. 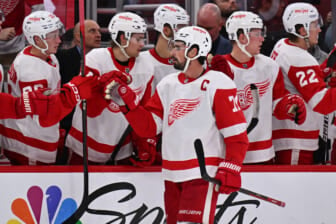 Defenseman Logan Mailloux agreed to a three-year, entry-level contract with the Montreal Canadiens on Wednesday.

Mailloux was chosen by the Canadiens with the 31st overall pick of the 2021 NHL Draft despite the player asking all the league’s teams not to select him because of a criminal charge he incurred while playing in Sweden.

The 19-year-old was charged and paid a fine for distributing an intimate photo of a woman without her consent.

“This is a decision that we have thought through carefully,” Canadiens general manager Kent Hughes said Wednesday. “Having Logan around members of our team and hockey operations staff for a good part of the summer allowed us to gain a greater appreciation of Logan Mailloux the person. He has an opportunity to affect positive change and we will work to support him in any effort towards that goal. Logan recognizes the impact of his gesture and of course, the process continues.”

Dave Dryden, a goaltender on the inaugural Buffalo Sabres team in 1970-71, died earlier this week at age 81.

Dryden is remembered as the player who introduced the modern goalie mask, a fiberglass helmet-and-cage construction that he helped to design in the mid-1970s.

He is the older brother of Hall of Famer and six-time Stanley Cup-winning goaltender Ken Dryden.

Ken and Dave Dryden made history on March 20, 1971 when they became the first siblings to oppose each other in goal in an NHL game.

According a statement released by the Sabres on Friday, Dave Dryden passed away on Tuesday.

He is survived by his wife, Sandra, children Greg and Debbie, and six grandchildren.

Dryden also played in 242 games with the World Hockey Association’s Chicago Cougars and Oilers, posting a record of 112-113-10 with a 3.51 GAA and eight shutouts.