Blackhawks: Marc-Andre Fleury hints that this could be his last season 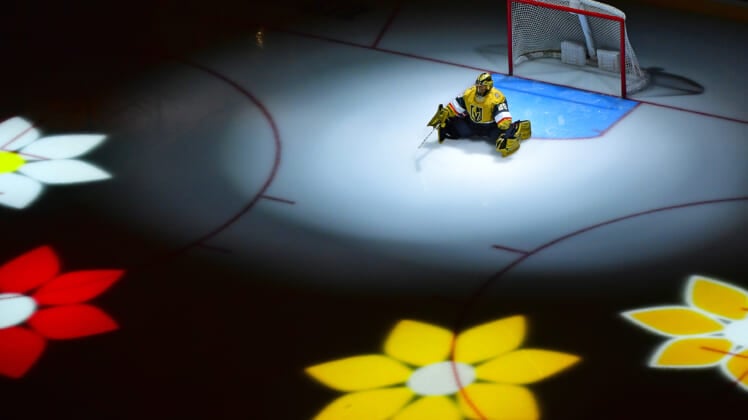 The reigning Vezina trophy winner is enjoying his new red threads. Marc-Andre Fleury has been all smiles posing for pictures in his new Blackhawks uniform and doing the media rounds.

At 36 years-old, getting traded from the Vegas Golden Knights with just one year-left on his contract was no easy thing.

“There’s a lot that goes into it,” Fleury said after agreeing to play in the Windy City. “I was very fortunate that they gave me some time to reflect on what I wanted to do, what was best for me and my family.”

Fleury will turn 37 in November, and hints that this could be his last NHL season.

“The day will come. I’m not sure when,” Fleury told Sportnet’s 32 Thoughts Podcast. “I’m getting older right? The body feels it some days… So I just try to enjoy what I have right now and go one year at a time.”

When pressed on his comment if there’s was a chance this could be his last season, Fleury laughingly acknowledged, “could be.”

Fleury admits he thought about retiring after being traded. It was nothing against the city of Chicago, but wasn’t sure if he wanted to uproot his family again.

“I’ve been doing what I love a long time, right?” Fleury told NHL.com yesterday. “So I didn’t want to be overly selfish about things. I thought I was going to maybe retire and finish it out, maybe live [in Vegas] after hockey. So it was a little bit of a change of direction.”

Blackhawks have a true star in net

Fleury is a three-time Stanley Cup champion with the Pittsburgh Penguins and worth every penny of his $7 million contract.

He went 26-10-0 with six shutouts to go along with a 1.98 goals-against average and a career-high .928 save percentage in 36 games this past season for the Golden Knights.